Games Workshop have posted a preview of the new Underworlds war band over on the Warhammer Community page. 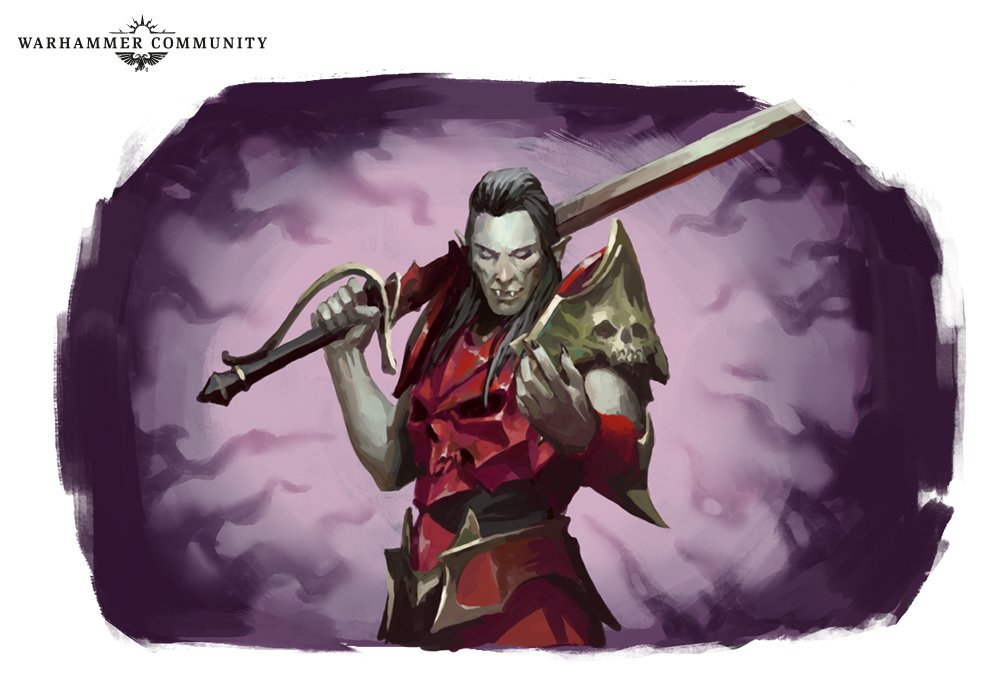 Hot on the heels of the release of the Starblood Stalkers, the Crimson Court is the next warband for Warhammer Underworlds. In anticipation of their release, we put our stakes away and sat down in a dark room with Warhammer Underworlds’ lead designer Dave Sanders to learn a little bit more about them.

Dave: A nightmare is descending on Beastgrave – well, four of them, to be precise. The vampires of the Crimson Court are on the rampage through the tunnels of Direchasm, hunting other warbands for sport and feasting on the defeated.

The Crimson Court embodies the contradictory aspects of the Soulblight vampires – they are superhuman, highly skilled, refined, and after their own way.* However, they are also bloodthirsty and driven by their hunger to feast on the living. Each of the vampires could succumb to this bloodlust at any time, erupting in an excess of violence that would make a Blood Warrior wince.

We wanted to represent this contradiction in the game, but in a way that made it a strong feature rather than a drawback. It made sense that the Crimson Court would tie in to the Hunger mechanic introduced in Direchasm, but it was less obvious how to do this in a characterful and interesting way.

At first, we considered making the fighters Inspired when they had a certain number of Hunger counters. However, that didn’t feel quite right – an Inspired fighter represents them at their very best, and that’s not really what you get when a vampire is utterly fixated on guzzling gore from the nearest mortal.

Instead, it seemed most appropriate that if they had no Hunger counters they would become Inspired. In this case, the vampire would have overcome their hunger and be acting with a clear head – with all of their supernatural abilities at their disposal.

With the addition of a rule to give each vampire one Hunger counter per round, so that Inspiring them wouldn’t be automatic, and the ability to, ahem, remove their Hunger counters after taking an adjacent enemy fighter out of action, it could have been a done deal.

It still wasn’t entirely satisfying, though – with this version, the vampires were almost too cool. Their Hunger would be dealt with fairly quickly and wouldn’t be much of a feature of the warband after they became Inspired.

The answer we hit upon is a mechanic that encourages you to give the vampires more Hunger counters. Once a vampire has enough Hunger counters, they are ruled by their Bloodthirst. This works almost like an alternative Inspire condition that gives you access to a different side to the fighter. It manifests differently in each of the vampires, making them more savage, or tougher, or faster. This felt just right for these conflicted monsters and gave us the opportunity to design some uniquely versatile fighters.

With this version, the player – just like the vampires – is pulled in different directions. Will you allow your fighters to succumb to their Bloodthirst, utilising their incredible speed and brute strength to win? Or will you try to rein in their Hunger, taking advantage of their Inspired abilities to control the battlefield? I can’t wait to find out.