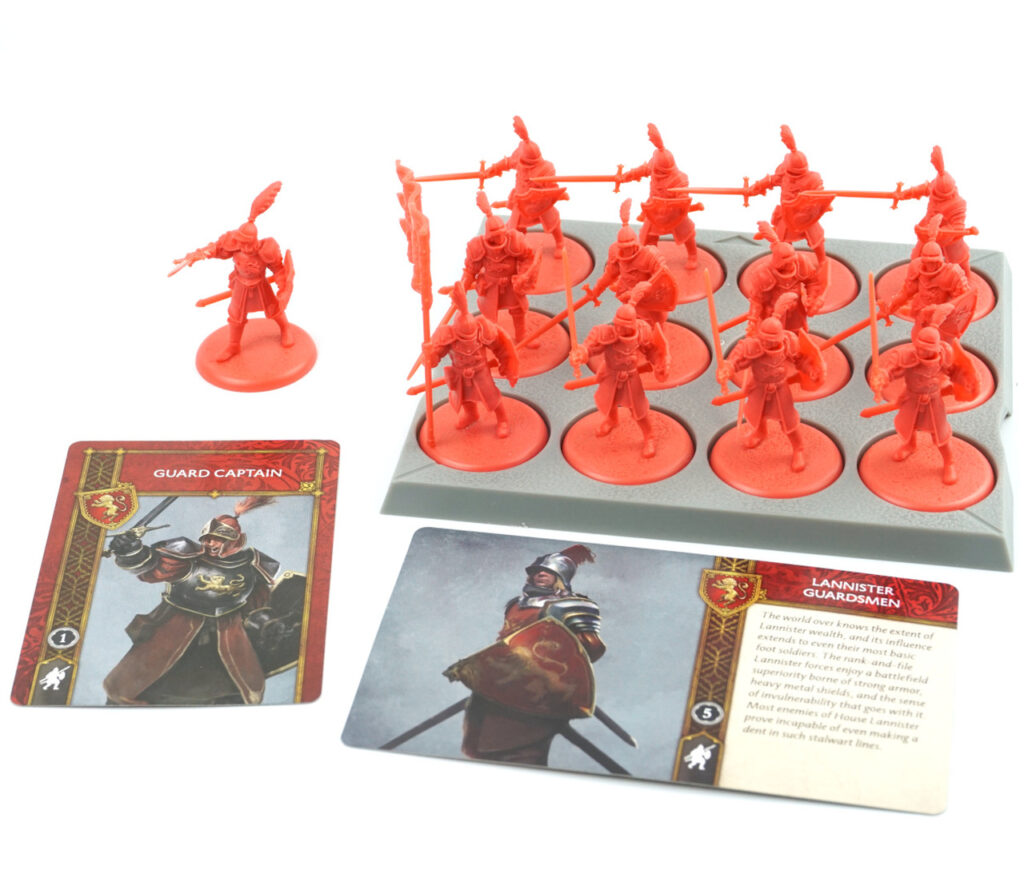 House Lannister wins fights through attrition. Their game plan revolves around sapping the enemy’s will and ability to fight – weakening their foes, undermining their plans, countering their plots, and intimidating their soldiers. They are phenomenal at defence, have a number of powerful healing options, and have tactics cards with reliable long-range effects. They also have a number of extremely high quality attachments and the synergies to make them work. The bulk of their power is in reliable and powerful medium and heavy infantry.

Lannisters are also very vulnerable to being shut down in turn. A lot of their abilities are based off complex synergies and they have relatively few independent operator units. A lot of their effects hinge off control of the Crown in particular and if your opponent has a way to deny it to you then your army can be thrown into disarray. Also, while you can go very deep into the morale game, opponents can go very deep into shutting it down and you should expect to be facing things like an army of 4+ morale saves if your opponent knows you’re coming.

Intrigue and Subterfuge: When an enemy NCU activates it loses all abilities until the end of the round; if you control the purse an enemy becomes Weakened. Sometimes this won’t make a difference and sometimes it can explode an entire gameplan. For example, in a Lannister mirror matchup, being able to disable Joffrey on an important turn can lock your opponent out of crown control which switches off the special abilities of the Redcloaks and the entire Kingsguard, which might be your opponent’s entire army.

A Lannister Pays His Debts: Attach to a combat unit; when a friendly unit is destroyed gain Vicious, and with the Crown +1 to hit. Absolutely savage when it’s switched on, with the caveat that Lannister units tend to be really hard to destroy. Still, though, never triggering an on-death effect because your opponent can’t kill you is a pretty good problem to have.

Hear Me Roar: This is a great card for dropping on a morale test. A lot of abilities, such as War Cry, require an opponent to make a morale test to trigger the ability and this can make that test fail and cause a wound along the way.

Bribery: If you draw two of these in your turn one hand it’s the best thing ever as you can halve your opponents combat potential from across the board. On any other turn it ranges from ‘whatever’ to actively useless because it costs a valuable NCU activation and most everything else you can do with that NCU is better than doing this.

Counterplot: A lot of factions have extremely good cards. The Lannisters, by and large, do not, but they do have this. The value of counterplotting a powerful enemy card is not just in them not using the card but in potentially throwing an entire turn that hinged off the use of that card into turmoil. If you’re looking at Lannisters in isolation you might not realize how good this is, but just know that there are cards out there that can make a charge roll an automatic 6 for distance and being able to stop that can be the difference between taking a unit of spearwives into the flank and not having that happen.

Fealty to the Crown: Really good when it works but it’s deeply unreliable. Lannisters have very limited access to the Panicked token, surprisingly, and given their generally morale-focused gameplay your opponent may well be bringing a list that’s designed to fail as few panic checks as possible. I advise spending it as soon as possible even if it only gets a wound or two back.

Subjugation of Power: An enemy performs a morale test with -2 for each crown and purse. On a failure they lose all abilities and can’t be targeted by friendly tactics cards. You can combine this with Hear Me Roar, and often should. This card isn’t as reliable as it may first appear. Firstly, it activates on the enemy’s turn and only lasts for that turn, meaning you can’t switch off defensive abilities. Next, the enemy unit that’s the biggest housewrecker in the game, the thing that you want to use this card on, will likely activate first in a turn before your NCUs have had a chance to get on the board so you can’t rely on the penalties to be in place. Like most Lannister stuff, when it works it’s great, but it comes with a lot of caveats and riders.

Lets take a look at some of the core units available to House Lannister. 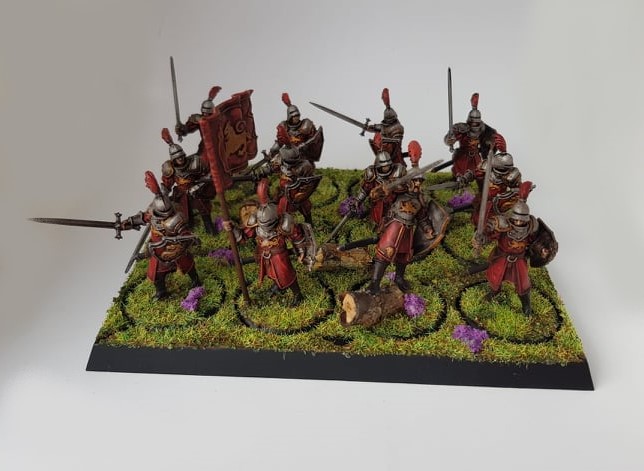 Lannister Guardsman. Seriously good objective and anvil troops, these basic infantry are the envy of almost every other faction. With their 3+ saves they’ll tarpit for days, and Lannister Supremacy is great for objective juggling – say your opponent snatches an objective from you in Dance with Dragons, this immediately forces a panic check that could give it right back to you. Where the Guardsmen fall down is their awful morale stat and anaemic killing power. They live and die by the panic check, the once they force on others and the ones they make themselves. A unit of Guardsmen holding a flank objective by themselves can be shockingly difficult to chew through but remember that they’re just buying time for the rest of your army to win.

Lannister Halberdiers. Really good minimum-initiative professional soldiers, the Halberdiers are a great add to a list because they can just generally go last, meaning that they’re not a unit you need to worry about when planning your order of operations. They also make a great place to park a variety of commanders and attachments who you’re trying to not have killed. Tywin Lannister loves being in a unit of Halberdiers.

Guard Captain: +1 Morale, -1 Casualty from failing panicked checks. An entirely reasonable add to a unit of Lannister Guardsmen because morale casualties are by far their biggest threat.