As young children, Jaime and his sister Cersei looked so much alike, that not even their father was able to tell them apart. Jaime grew into a tall, handsome man, with curled hair the colour of beaten gold. He has flashing cat-green eyes, and a smile that cuts like a knife.

As a Kings guard knight, Jaime wears white armour and a white cloak. On occasion he wears golden armour decorated with the Lannister lion, with gilded longsword and ornate lion’s helmet. He slew the Mad King Aerys II Targaryen while wearing his white cloak over his golden armour.

Jaime is a born warrior, with little interest in politics and court intrigue. He takes few things seriously. By his own admission, Jaime only feels truly alive when fighting or making love. He comes across as arrogant, amoral, and dishonourable. Because of the death of King Aerys, Jaime has earned such a bad reputation that everything he says is usually cast in the worst possible light.

Jaime is rash, headstrong, and angers quickly. He is known to have little patience, and he worries about the consequences of his actions only after committing the act. A great and especially skilled warrior, Jaime inspires loyalty in his men. He is bold and does not fear death. According to Catelyn Stark, Jaime is an experienced battle commander.

Raised to Knighthood and to the Kings guard

At the age of fifteen, Jaime participated in the campaign against the Kingswood Brotherhood, during which he saved Lord Sumner Crakehall from Big Belly Ben and crossed swords with the psychotic Smiling Knight. After the brotherhood had been defeated, Jaime was knighted for valour shown on the battlefield by Ser Arthur Dayne, a member of the Kings guard of King Aerys II Targaryen.

Now a knight, Jaime was to return to Casterly Rock. He decided to stop in King’s Landing on route, to visit his sister, from whom he had been separated for years. There, Cersei informed him that their father, Lord Tywin Lannister, intended to betroth him to Lysa Tully, and had gone as far as inviting Lord Hoster to King’s Landing, to discuss the dower. Cersei suggested that Jaime become a member of the Kings guard instead, replacing the recently-deceased Ser Harlan Grandison. Though this would require Jaime to give up his claim to Casterly Rock and his position as Tywin’s heir, it would allow him to be close to Cersei and free himself of the unwanted marriage to Lysa. After a night of passionate sex, he gave his consent to Cersei’s plan. While the siblings expected Tywin to oppose it, Cersei claimed he could not openly object. She promised to do the rest, and a month later, Jaime received news at Casterly Rock that he had been chosen for the Kings guard, and was to present himself to the king during the grand tourney at Harrenhal, where he would say his vows and don his cloak. Jaime’s and Cersei’s plan did not entirely work as expected. Their father, furious about the king’s decision, pleaded illness and resigned his position as Hand of the King. He returned to Casterly Rock, taking Cersei with him, which separated the siblings once more.

Jaime was raised to the Kings guard by its Lord Commander, Ser Gerold Hightower, in a ceremony at Harrenhal in 281 AC, making him the youngest knight ever to be raised to the order. That night, however, King Aerys soured the honour by sending him back to King’s Landing to guard Queen Rhaella and Prince Viserys, depriving Jaime of the chance to participate in Lord Walter Whent’s tourney. It was that moment during which Jaime realized that the king had only chosen him for the Kings guard to slight Lord Tywin, of whom Aerys was insanely jealous, and to rob him of his heir. Jaime left for King’s Landing at once. When a mystery knight appeared at the tourney, King Aerys became convinced that it was Jaime, who had defied his orders and secretly returned. However, the mystery knight disappeared, and nothing further came of the king’s suspicions.

By being raised to the Kings guard, Jaime gave up his claim to Casterly Rock. Nonetheless, Tywin continued to regard him as his true heir, and was always angry to see Jaime dressed all in white, instead of the red and gold of House Lannister.

Serving in the Kingsguard

Raised to the knightly order in 281 AC, Jaime served in King Aerys II Targaryen’s Kingsguard for two years. Jaime grew more and more disillusioned, witnessing the Mad King’s growing insanity and tendency for burning men alive. In 282 AC, Jaime witnessed the executions of Brandon and Lord Rickard Stark, standing at the foot of the Iron Throne as the two Starks were dying. Jaime coped by “going away inside”, focusing on thoughts of Cersei instead of the events occurring in front of him. Afterwards, he was reminded by his Lord Commander, Ser Gerold Hightower, that he swore a vow to guard the king, not to judge him. Jaime would later advise others to “go away inside” as a way to deal with a harsh reality and making an appalling task tolerable.

Following the deaths of Brandon and Rickard Stark, Lord Jon Arryn refused to obey Aerys II Targaryen’s order to send the heads of Eddard Stark and Robert Baratheon, starting a war that would become known as Robert’s Rebellion. After the Battle of the Bells, it became apparent to Aerys that Robert was a serious threat to Targaryen rule. He devised a plot with the help of his chief pyromancers, which involved the placement of caches of wildfire all throughout the city. The plan was to burn the entire city to the ground rather than lose it to Robert. His new Hand, Lord Qarlton Chelsted, who had been elevated to the position after the exile of the previous Hand, Lord Jon Connington, following the Battle of the Bells, eventually confronted Aerys about his plan. Failing to convince Aerys to give up his plan, Chelsted resigned the office, flinging his chain of office to the floor. For that, Aerys burned him alive. As Aerys did not trust his newest addition to the Kingsguard, Jaime was kept close by, and therefore heard and saw it all.

Aerys grew aroused by burning people, and the night Chelsted was burned, Aerys visited the chambers of his wife. Jaime and his sworn brother, Ser Jonothor Darry, stood guard outside Queen Rhaella’s bedchamber while Aerys raped her, listening to her cries. When Jaime, feeling conflicted, eventually commented to Jonothor that they were sworn to protect the queen as well, Jon replied, “but not from him.”

Shortly after, Prince Rhaegar Targaryen left the Red Keep to face the rebels on the Trident. The day the prince left, Jaime begged Rhaegar to take him along, suggesting one of the other Kingsguard knights could remain at the king’s side instead. Rhaegar refused the suggestion, admitting that King Aerys wanted to keep Jaime close as a hostage against his father, Lord Tywin. Rhaegar promised an angry and disappointed Jaime that changes would be made when he returned from the battlefield, and charged Jaime with keeping his wife, Elia Martell, and their children safe.

While a rebel army led by Lord Eddard Stark raced towards King’s Landing after Rhaegar’s death at the Trident, Lord Tywin Lannister appeared first at the gates of the capital with twelve thousand men. His main concerns were that King Aerys II Targaryen would be capable of killing Jaime out of spite, as well as that Jaime himself could do something rash. Though Lord Varys, the master of whisperers, counseled Aerys against opening the gates, the king listened to Grand Maester Pycelle, who told him that his old Hand, Tywin, had come to his defense. As such, the city gates were opened to Tywin and his army, but once inside, Tywin betrayed Aerys and began the Sack of King’s Landing.

As the sole Kingsguard remaining in King’s Landing, the defense of the Red Keep became Jaime’s responsibility. Knowing that he did not stand a chance to defend the castle, he sent a messenger to the king, asking for leave to make terms with the attackers. The messenger came back with the Aerys’s order that Jaime should bring him Lord Tywin’s head, to prove that he was no traitor. The messenger also informed him that Rossart was with the king, leading Jaime to believe that Aerys was about to command the destruction of the city.

Jaime killed Rossart, who was dressed as a common soldier and hurrying to a postern gate. When the king in the throne room saw the blood on Jaime’s sword, he demanded to know whether it was Tywin’s, renewing his command that Jaime should bring him his father’s head, otherwise Jaime would burn with all the other traitors. When Jaime answered that it was Rossart’s blood, the frightened Aerys ran towards the Iron Throne. Jaime hauled him off the steps, and killed his king with a single slash across the throat, thereby preventing him from giving the command to burn the city to some other pyromancer. 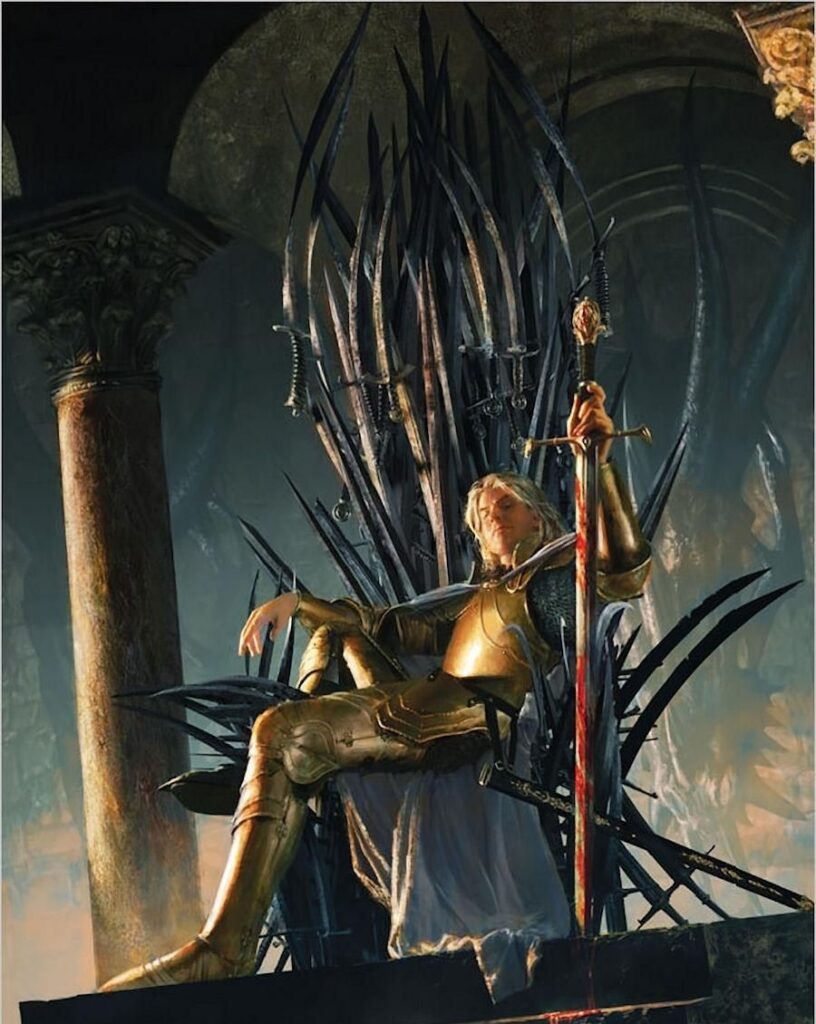 Lord Tywin’s men, led by Ser Elys Westerling and Lord Roland Crakehall, burst into the throne room in time to see that Jaime had killed the king, forestalling any chance for Jaime to steal away and let someone else claim responsibility. Jaime told them to advise all who were still fighting that the king was dead and to spare anyone who yielded. Lord Crakehall then asked whether a new king should be proclaimed as well, indicating that it could be Lord Tywin or Robert Baratheon or that even a new Targaryen king could be proclaimed. Jaime mused on the possibility of choosing Viserys or Rhaegar’s son, Aegon, as the new king with Tywin as his Hand, but, realising that both boys shared the same blood as Aerys and thus the same propensity for madness, Jaime declared to Lord Crakehall that it was all the same to him. He then seated himself on the Iron Throne, waiting to see who would come to claim it. He was found sitting there with his golden sword across his legs when Lord Stark rode into the hall with his men to claim the throne for Robert. Jaime gave up the throne to Eddard, proclaiming it to be an uncomfortable seat.

In the following days, Jaime secretly hunted down and killed the two other pyromancers involved in Aerys’s wildfire plot, Belis and Garigus. Although Eddard urged Robert to strip Jaime of the white cloak, arguing that he should at least be made to join the Night’s Watch, Robert listened to Jon Arryn instead. Jaime was pardoned by King Robert I, together with Varys and Pycelle, and continued to serve in the Kingsguard along with Ser Barristan Selmy. Jaime was present at Robert’s coronation feast, where Robert joked about the fact that Jaime was already being called “Kingslayer”. He is known to himself, other Kingsguard, and as far as Winterfell and Essos by the nickname. Though reviled by the realm for his betrayal, Jaime considers the slaying of Aerys to be his finest act. His true motivation for killing King Aerys remains unknown to the masses.