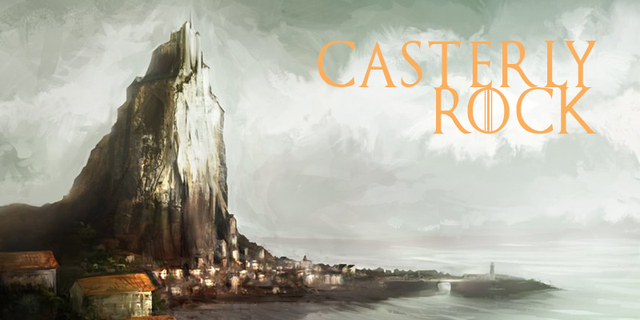 Casterly Rock is the ancestral stronghold of House Lannister. It is located on the Western coast of Westeros on a rocky promontory overlooking the Sunset Sea. It overlooks the major city of Lannisport. A major goldmine is located under Casterly Rock. It is one of the most productive in the realm and provides House Lannister with their wealth.

The thoughts of Jaime Lannister.

According to legend, a huntsman once tracked a lion that was terrorizing its village all the way to its den. Though armed with only a spear, the man managed to kill both the lion and its mate, but spared the cubs. This mercy so pleased the Old Gods that they sent a shaft of sunlight deep into the cave, gleaming off golden walls. The hunter became a miner and built a ringfort to guard his new wealth.

Nobody ever asks what happened to the cubs. Maybe the gods forgot about them, and they starved. Maybe there never were any cubs or lions or hunter, doesn’t matter.

Someone found enough gold in that cave to buy whatever truth he wanted, along with a castle that he’d name after his new family. Casterly Rock.

Thanks to that gold, Casterly Rock soon became the largest, wealthiest, and best-defended castle in Westeros. An army that struggled up the main approach would still have to climb thick, high, and well-defended walls.

Should they choose instead to lay siege, the sea helpfully carved a massive cave beneath the castle, which over time, became a private port complete with docks, wharves, and shipyards. And so to this day, even with all the gold in Westeros to tempt invaders, Casterly Rock has never fallen.

At least not in battle. The castle is sadly all that remains of its namesake family, the Casterlys. According to another legend, my ancestor Lann the Clever, swindled the castle from them.

The most common story is that he found a hidden cleft in the rock and snuck into the castle.

As night, he whispered threats into sleeping ears, howled in the darkness, planted one brother’s treasures in the room of another, and so forth. By the end of his games, the Casterlys believed a demon was haunting their home and fled. 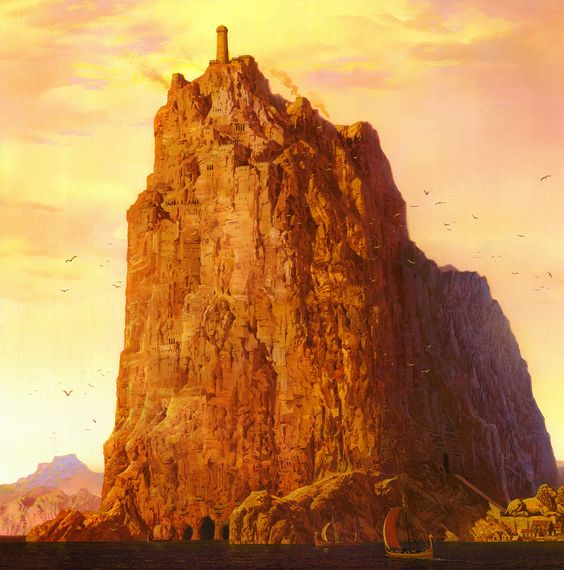 My brother prefers a different version. Lann the Clever did find a secret entrance into the rock but used it to have his way with the Casterly maidens.

Eventually, the girls gave birth to golden-haired bastards, and the Casterlys had no choice but to accept their father into the family. In gratitude, he changed the family name to honour himself, and House Lannister was born.

The Casterlys used the gold of the rock to become lords. The Lannisters became kings. For thousands of years, the Kingdom of the Rock ruled the Westerlands.

When the ironborn became a nuisance, my ancestor sailed to the Iron Islands and returned with a hundred ironborn hostages, promising to hang one from the rock every time the ironborn dared raid our shores. The ironborn stayed away, well, after twenty or so.

When the Andals arrived after sweeping across the rest of Westeros, we invited their sons and daughters into the rock as squires and court ladies. I don’t think we ever had to hang any of them.

Finally, Aegon the Conqueror defeated us on the Field of Fire, and my ancestor knelt. Still, little changed but titles and taxes, for when Visenya Targaryen saw the rock, she gave thanks that my ancestor had met Aegon on the field. Even dragon flame would have washed over the castle like the waves and left just as much a mark.

But now the mines are dry and Casterly Rock just that; a rock. Our gold has passed into legend just like the merciful huntsman and Lann the Clever. As will our family if we lose this war.

Unlike the Casterlys, however, we won’t even have a castle to remember our name.