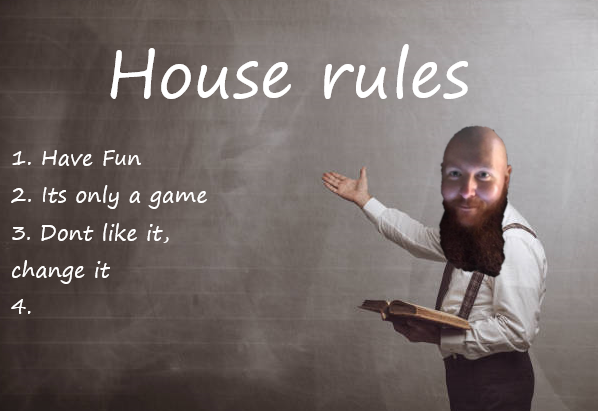 Every game has those annoying rules that just don’t make sense, those little details that break emersion or ruin a gaming experience.

If you mainly play at tournaments or official stores, I’m afraid that you just have to suck it up buttercup.

If you mainly play at gaming clubs or in a friendly gaming group you don’t have to put up with these niggles ruining your games.

You can create house rules.

What are house rules you say?  well, a house rule is simply a rule you implement in your house “gaming club or group”.

If you play in friendly gaming groups you can create house rules that effect your games, sort out and re write rules that are annoying your group, add limitations or just ignore some rules completely.

Just spend some time with your regular gaming group and have a discussion about the rules that you don’t like, you can change what is necessary to suit your group.

In my regular group we set limitations and set house rules for our games. here are a couple of examples.

We are big fans of Warhammer Fantasy Battles 8th edition but there were a couple a couple of things we didn’t like, so we changed them. We removed the number 6 spell from each of the spell decks. We banned allies in armies unless the game was over 4000 points. We implemented the rule that horde units must always be wider at the front than the side. These little changes levelled up our games and created a balance between the many factions.

When we play Horus Heresy we set minimum numbers for models in power armour “it is a game about a civil war between marines”. We also ban artificer armour on squad sergeants, as there’s nothing more annoying or emersion breaking than a sergeant tanking 30 bolter shots with his 2+ save.

That was just a couple of rules we change to improve our gaming experience.

You can change whatever rules you like in a game, it is a game after all and games are supposed to be fun! So change or remove those rules that ruin your fun.