And now for something completely different, I recently was given a Jack Nicholson (who is in the shining) bust head to paint and replicate in a realistic fashion. having seen the shining myself, i went ahead with this piece to work on. I’ve had prior experience working on miniature heads but nothing to this size, so it came with a welcomed challenge but having taken the skills and know-how of how to paint faces, I was eagerly filled with energy to get this commission done and I think the results speak for themselves.

A little bit of history behind the shining won’t hurt to read and I think I’ll let you guys have a understanding of why this film is so well remembered and why it’s considered the greatest horror film of all time.

Released in 1980, this Psychological horror film based on the book of the same name by Stephan King was adapted by Stanley Kubrick into a 146 minute edge of your seat movie. The original book writer who has wrote IT, Pet cemetery and many other page turners, have become best sellers, with his stories turned into many TV series and films, Stephen King specialises in the suspense and carefully placed scares with interesting premises and rememberable characters.

The story of the shining is about a man and his family who set out to a hotel to take care of it during the off season, the son Danny has special psychic powers known as the Shining, his mum

Wendy is your typical mother who isn’t to special at the start of it all and more of a bystander at the start of the film. Jack, our main character drives up to the hotel with a suspenseful music playing in the background with long shops from far away overview in the surrounding area of the hotel. Stanley Kubrick was well renowned for having multiple shots taken to his specifications, he’d often take the same shot 80 to 100 times till he received it as correct. we are gradually introduced to the hotel when they arrive, everything seems quite normal until it’s briefly mentioned by the hotel manager that they had been killing by the previous caretaker of the hotel. Jack uses the opportunity at the hotel to write out his book, whilst the other two members of the family are staying there during the time that jack is writing.

They also meet up with a fellow Shiner named Dick, Who communicates to Danny through their mind in a scene prior it was hinted that the hotel is not what it should be and throughout the course of the film we gradually see worse and worse events occur to the point where things got a little bit out of hand.

I won’t spoil the film but it’s something that you yourself have to say in order to get an understanding of it. I highly recommend it if you have the time to watch and you will not be disappointed. Right now on to the painting side of things

I start off by spraying black over the bust, Using a model spray can that you can find it your local hobby shop, I then grab some airbrush paints and proceed to do a pre-highlight white over areas of the face that would have the most light been hit. This is because when a face is under direct sunlight the areas of the face that are more prominent would gather more light in those areas as they stick out more. Once the white has been put on I then proceed with a mix. That mix is a 80/20 of word Bearers red and purple, This is because we want to work at the colours from dark to light. we want to build up the face and so we start with a dark colour first.

Once 2 to 3 layers have been put down that are quite thin I then grab myself some Cadian fleshtone With a tiny bit of the mixture from before still in the pot, I then proceeded to go over the areas of the face but leaving the recesses of the face still there so the shadows are still present. I then gradually build up the cadian fleshtone to a lighter colour by adding ice yellow from Vallejio Until we get to a point where it becomes quite bright and we need to knock down the colours and also blend the outer shadow and the shadow into the Mid-tone off the face and the highlights. to do this we grab ourselves some contrast paints specifically Gryph charger grey, Through the airbrush we want to try and blend the colours together so it is seamless. 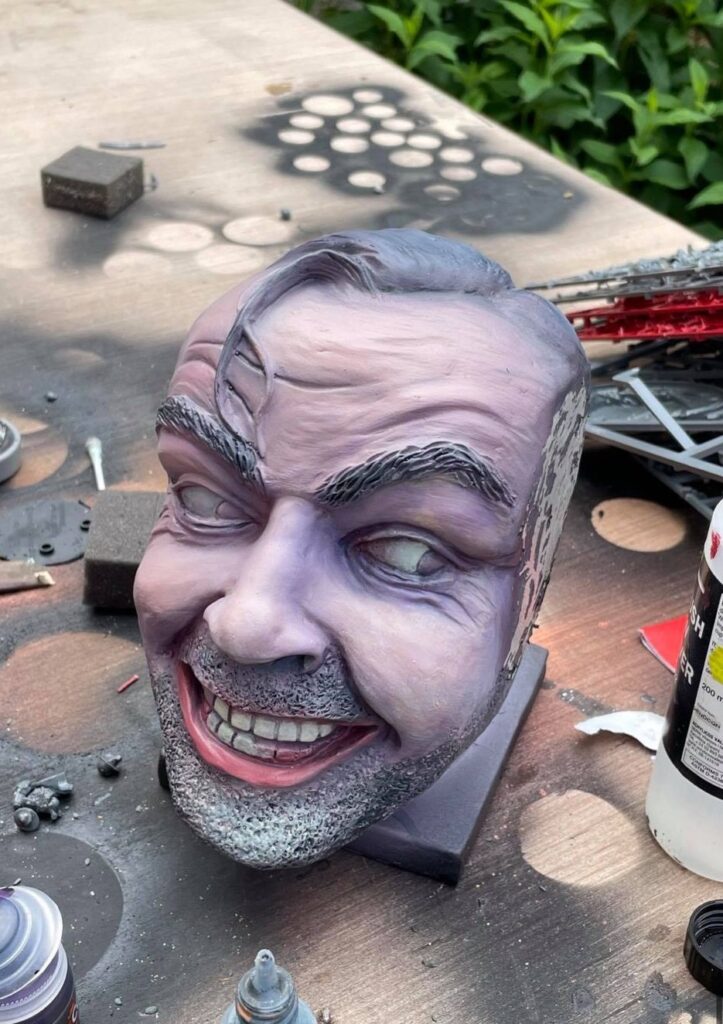 The face may look quite purple at the moment but we will knock that down at a later stage. 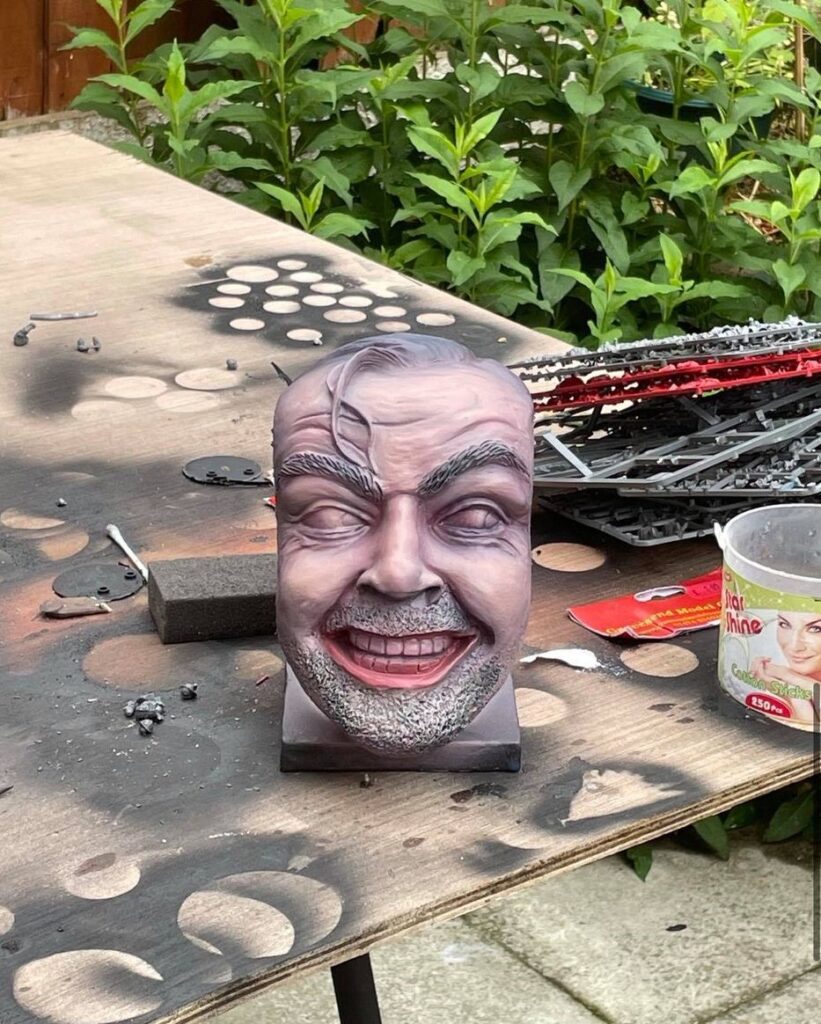 Once this is done we then move onto a slightly pinkish pale skin colour, we want to replicate realistic skin so glazing around the area almost like a wash will knock off some of the purple and create a realistic looking head. at this stage we are focused on now using brushwork and we will not be coming back to the airbrush at this point. Once this is done we then get some of our ice yellow from Vallejio, we grab a special brush called a eradicator brush, I’d recommend searching up it is a fantastic brush to use for stippling and we use said brush to stipple highlights on the cheek nose forehead and chin. Once this is done you get your normal brush and start feathering the harder outlines of where the paint has been placed back into the recesses of where the shadows are of the face. But not leaving the stippling to dry.

Once this is done we want to make sure that the shadows are still prominent and that everything blends smoothly in with the look of the bust I’d recommend seeing which part of the face might need a bit of revision and also where realistically the shadows would be. 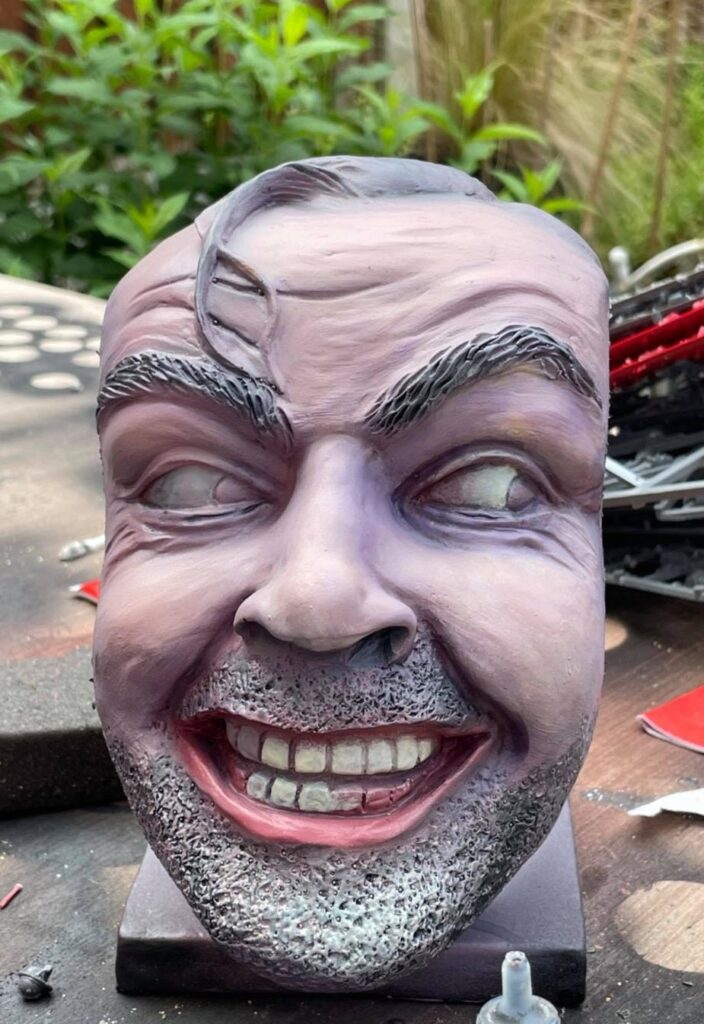 The lips were done using a combination of word bearers red and pinkish reds. what’s the white tees was done using ice yellow and apothecary white contrast paint to give that yellowy looking teeth. The same can be said for the eyes but adding a hint of word bearers colour to the corners of the eye where the veins and slight redness would be. As of time of writing I need to work on the hair and it actually has given me an opportunity to go back to the film to watch it to see what Jack Nicholson‘s hair looks like in terms of colour. 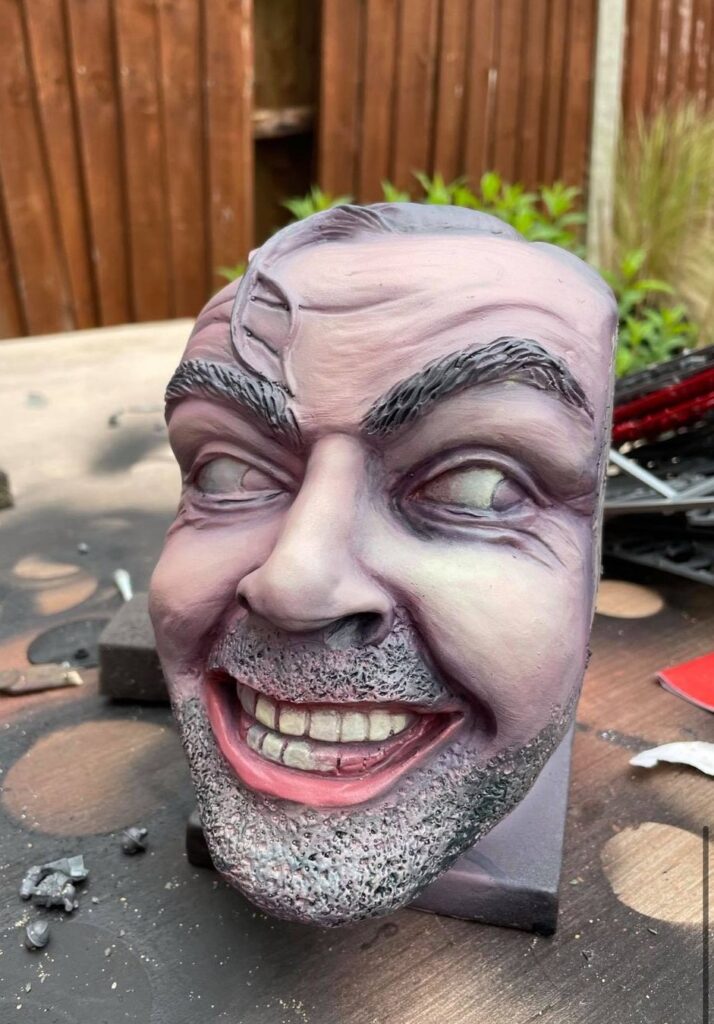 hopefully that makes sense and pictures provided should give you a clearer detail of what I mean but if not feel free to contact me through the links provided by Burning Beard studios That point to my direction for a one-to-one chat and I’ll try and explain the process that went through thank you. 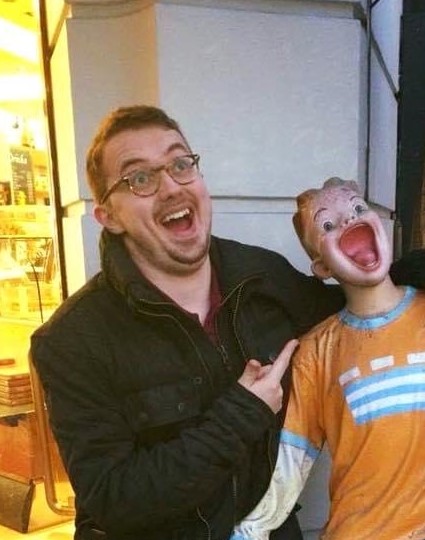