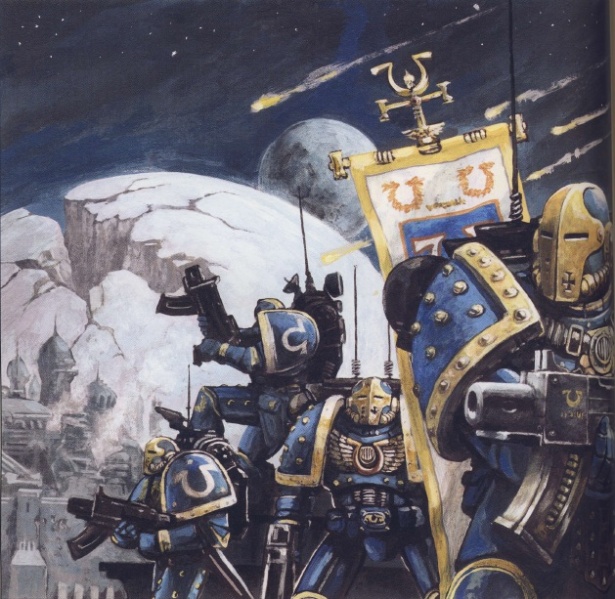 The Ultramarines, in the days before being reunited with their Primarch, were originally known as XIII Legion. The legion was created towards the end of the Unification Wars, developed from a gene-seed that was noted to be absent of mutation and with a high adaptability. The original recruits were drawn from from the sub-equatorial maglev clans of Panpocro, the war families of the Saragon Enclave, the Midafrik Hive Oligarchy and the anthropophagic tribes of the Caucasus Wastes. As varied in culture and origin as these groups were, they all had one factor in common; their violent and often bitter resistance to the later stages of Unification, a resistance broken ultimately in each case not by negotiated surrender but near annihilation, with in some situations little remaining save interned refugees and orphaned populations left by the savage conflicts which had brought these peoples to heel. The legion was created at such a late stage in the war that they have no recorded combat operations on Terra, instead being used for the first time for the liberation of the Solar System. During the Early Great Crusade, the Legion became known as the War-Born, referring to their disparate Terran origins that were all nonetheless forged through war.

We will talk about Roboute Guillimen in more detail another time but here is a little over view of the Primarch.

Guilliman was a charismatic and gifted leader, beloved of his people and singularly capable of compartmentalising incredible quantities of information. He was an organiser, a logistician, one capable of turning the wildest theories into practical reality and rendering order from chaos.

When the Emperor’s crusading forces finally reached Macragge in the late 30th Millennium, the son was reunited with his true father. Guilliman was given charge of the Ultramarines Legion, and wasted no time in putting his stamp upon it. In the conquests that followed, the Ultramarines became renowned as exemplars of what it meant to be a Space Marine.

Under Guilliman’s leadership they became arguably the most strategically gifted and tactically balanced of all the Legiones Astartes. Working on the basis of theoretical situations and practical solutions, the Ultramarines fought with exceptional efficiency. They drove the foes of Humanity before them, their armies fighting like intricate and perfectly tuned machines to swiftly and decisively outmanoeuvre every foe.

With the exception of the Luna Wolves, no Legion conquered as many worlds, or conquered worlds as fast, or left conquered worlds in such good state during the Great Crusade, as the Ultramarines. Guilliman restored the legion’s morale and prestige following difficulties in the Osiris Rebellion and later took revenge on the Osirian Psybrids at the Battle of the Eurydice Terminal. Whenever Guilliman liberated a world, he would not move on until he had set up a self-sufficient defence system, and left advisors behind to create industry, set up trade routes with the rest of the Imperium, and form a government whose first concern would always be the well-being of the people. The success of the Ultramarines may be thanks to their diverse but stable gene-seed. In them was found a mixture of aggression and restraint, discipline and determination which rendered them supremely suited for joint taskforce operations and cross-theatre warfare.

As Ultramar grew into a small stellar empire in its own right, Guilliman created a supremely efficient military machine, centred around Macragge, that provided the Ultramarines with a steady flow of new recruits. Between this factor, and the minimal casualties suffered as a result of Guilliman’s tactical genius, the Ultramarines soon became the largest of all the Space Marine Legions— so large, in fact, that an organizational unit above the Company was required. The Ultramarines were thus organized into Chapters, numbering twenty-two just before the Battle of Calth.  Rumors speculate that the size of the Ultramarines could only have been possible due to the fates of the Two Unknown Legions.

At the time of the Horus Heresy, it is estimated that the Ultramarines Legion numbered around 250,000 Space Marines.

Before Horus declared his treachery against the Emperor, he ordered the Ultramarines Legion to assemble for war in the Veridian System in Segmentum Tempestus far to the galactic south, claiming that the system was under attack by an Ork invasion force from the Ghaslakh Empire. Ultramar was close enough for an assault against Veridian, so Guilliman ordered his Legion to assemble in the Calth System.

We will go into detail of the Ultramarines first engagements in the Horus Heresy at a later date.