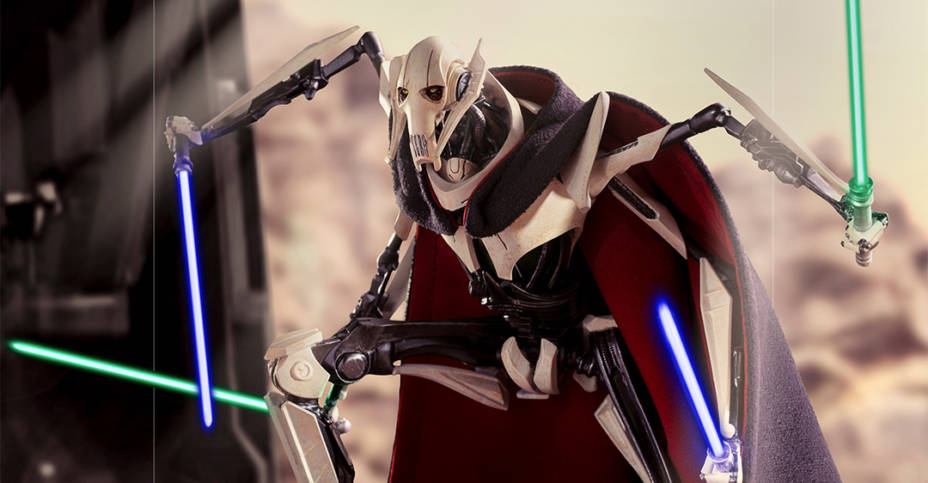 Part 16: “Your lightsabers will make a fine addition to my collection.”

Who was General Grievous?

Grievous, born as Qymaen jai Sheelal, was a Kaleesh male warlord who served as a commanding officer in the military forces of the Confederacy of Independent Systems during the last years of the Galactic Republic. Although he was known by his rank as a general, Grievous was the Supreme Commander of the Separatist Droid Army that engaged the Grand Army of the Republic throughout the pan-galactic conflict of the Clone Wars. Noted for his ruthlessness and extensive cybernetic enhancements, Grievous inspired fear as he travelled across the galaxy, invading entire worlds and engaging the Jedi Knights of the Republic.

A native of the planet Kalee, Grievous sustained severe injuries that required extensive repair by the time of the Clone Wars. Willingly submitting to a procedure that rendered him more mechanical than organic, he became a living weapon, granting him lightning-quick reflexes and devastating strength. Although he was neither Jedi or Sith, nor even sensitive to the power of the Force, Grievous was a skilled lightsaber duelist, having trained in the art of the lightsaber under the fallen Jedi Master-turned-Sith Lord Count Dooku. Known for his hatred of the Jedi Order, Grievous killed Jedi over the course of the war, and would claim their lightsabers both as trophies and weapons to be used against other opponents, be they Jedi or clone troopers. The cyborg, nicknamed the “head clanker” by the Republic clones due to his cybernetics and role as Confederate Supreme Commander, became one of the Republic’s priority targets.

In addition to his combat skills, Grievous was a brilliant military strategist who oversaw multiple campaigns throughout the Clone Wars—from the Battle of Kamino, where he failed to halt the production line of clone troopers; to the Battle of Dathomir, where his battle droids massacred the Nightsisters led by the witch Mother Talzin. In 19 BBY, Grievous launched a daring raid on Coruscant, the Republic capital world, resulting in the abduction of Supreme Chancellor Sheev Palpatine. However, the Jedi succeeded in rescuing the Chancellor while driving back the Separatist invaders. Following the loss of Dooku, Grievous and his army went into hiding in the Outer Rim Territories. Unknown to Grievous, his master, the Sith Lord Darth Sidious, betrayed the general’s location to the Jedi Order, allowing them to invade the planet Utapau in an effort to bring a swift and decisive conclusion to the war. As a result, Grievous was ultimately slain by his nemesis, Jedi General Obi-Wan Kenobi, whose 212th Attack Battalion went on to secure Utapau even as Order 66 went into effect, marking the fall of the Republic and the rise of the Galactic Empire.

The General Grievous miniature is one of the new hard plastic miniatures tat comes on a sprue. The sprue comes with multiple options allowing you to build General grievous with various weapon loadouts.

I’ve chosen to build General Grievous with 2 Lightsabers and a pistol.

I glued the parts into their various sub assembly components before deciding on a pose. 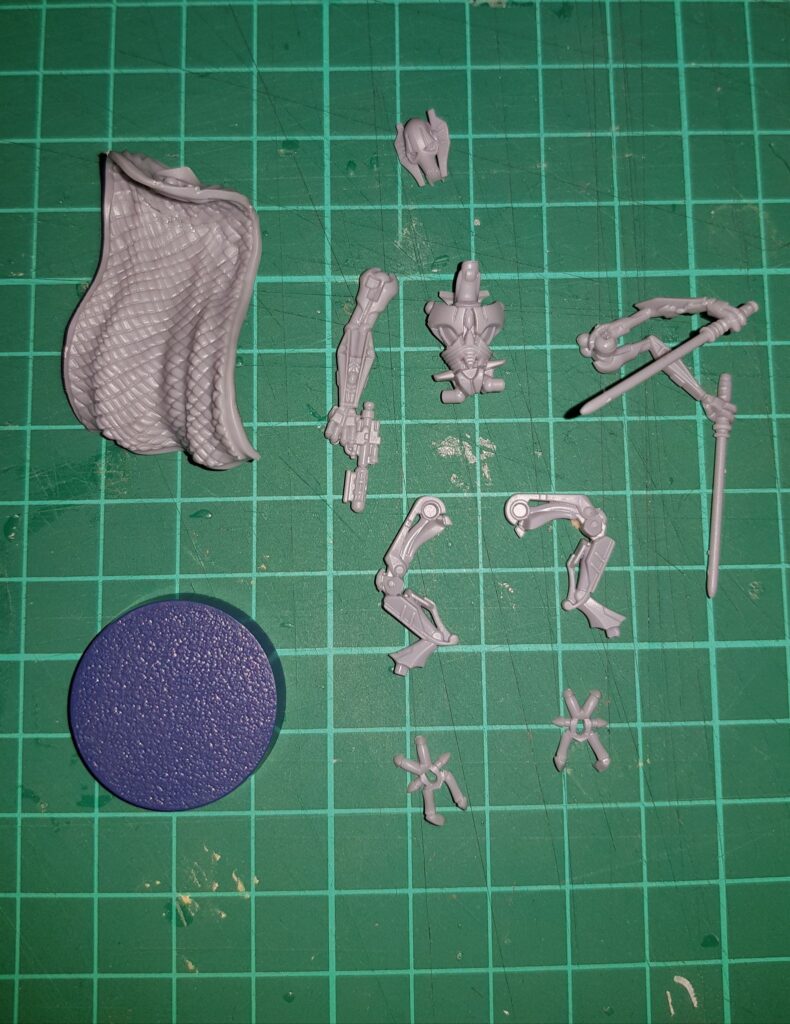 As with the Obi Wan miniature i decided to mount General Grievous on a piece of slate increasing his stature while standing amongst the other Droids. 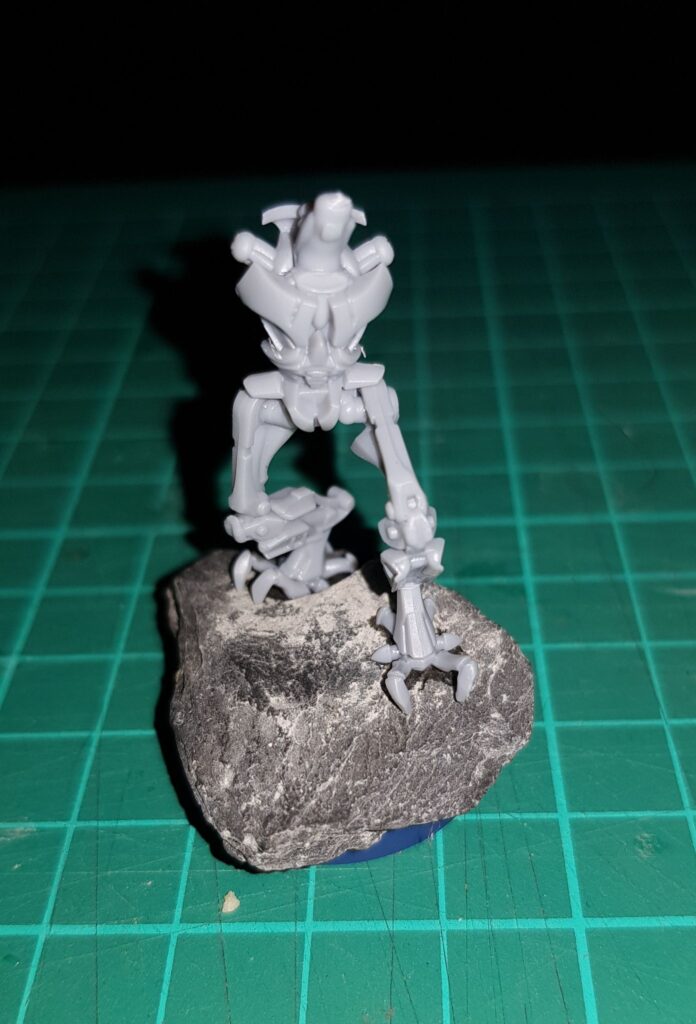 Once the glue was dry on the feet, I glued on the Lightsaber arms and the arm holding the pistol.

I chose not to glue on the cloak or head for ease of painting.

I used a little bit of putty to attach the head for a couple of pictures. 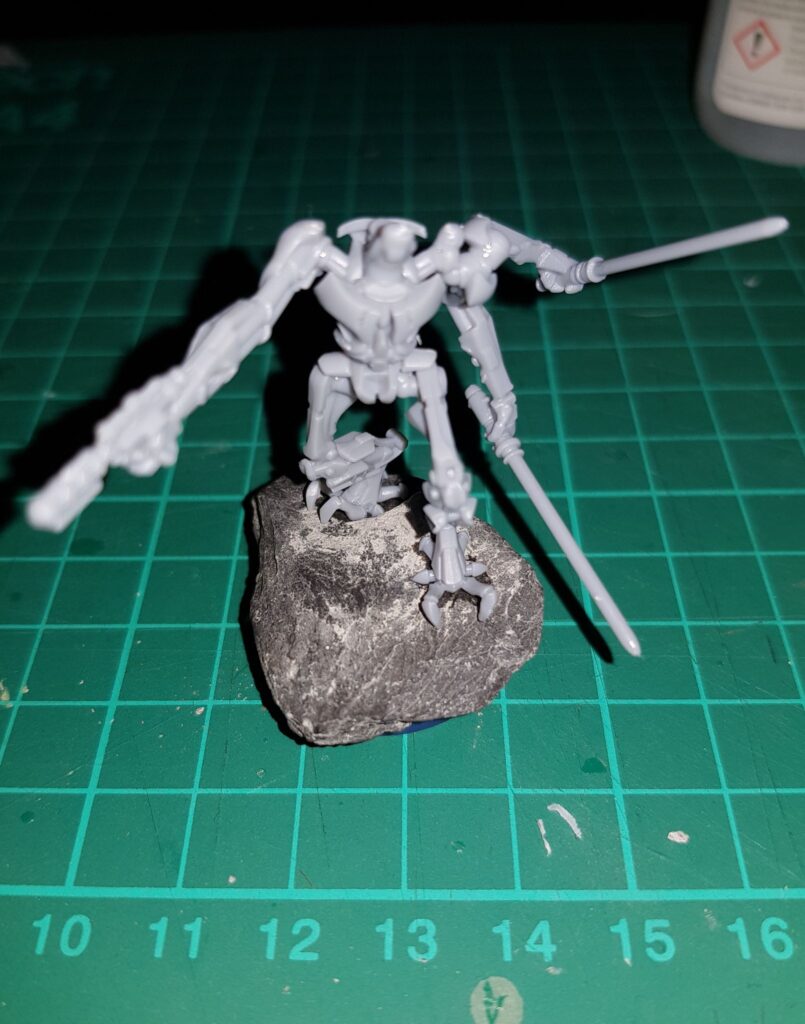