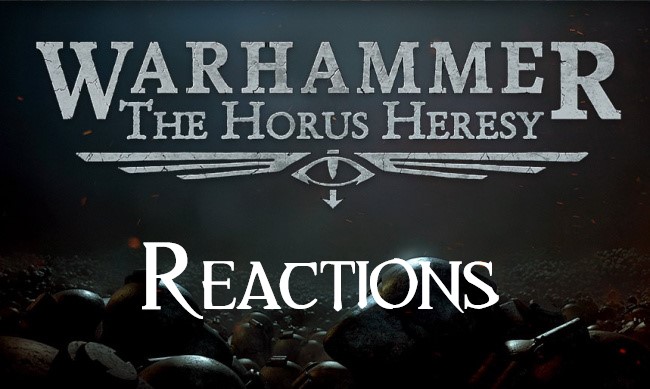 Reactions are the biggest change in the new edition of Horus Heresy, adding opportunities for the opposing player “react” to things in the Movement, Shooting and Assault phases.

A Reaction is an ability which allows a Reactive Player to take an action in their opponent’s turn. Reactions sort of existed in the previous edition, in the form of Overwatch. Reactions have been fully fleshed out, adding some fun and flavorful thematic scenes to your games.

Each player has a Base Reaction Allotment. This is 1 Reaction per phase of your opponent’s turn – so one in the Movement, one in the Shooting, one in the Assault phase.

You can increase the Base Reaction Allotment with some Warlord traits, characters, powers and abilities. This can increase the amount of reactions you can use per phase, up to a maximum of 3.

You cannot do a Reaction if you are Pinned or Falling Back, or if you have already done a Reaction in that phase with that unit.

If an enemy unit ends its move in line of sight and within 12”, you can take a Reaction.

Advance – move up to your Initiative value directly towards an enemy unit which triggered the Reaction. Vehicles can pivot 90 degrees and move 6” forward.

Withdraw – The Reacting Unit can move up to its Initiative value directly away from the enemy unit which triggered the Reaction. Vehicles can pivot 90 degrees and move 6” backwards.

If an enemy unit shoots one of your units, after Armour Saves but before Damage Mitigation and casualties, you can choose to take a Reaction.

Return Fire – You can make a Shooting Attack against the unit which triggered the Reaction. Vehicles can fire Defensive weapons Template Weapons can Wall of Death if the enemy is within 8”.

Evade – All models in the Reacting unit (provided they can move) gain Shrouded (5+), which is a mitigation save taken after armour saves, like feel no pain.

If you have a Charge declared against you, you can choose to React.

Overwatch – You make a shooting attack at full Ballistic Skill, with Templates using Wall of Death.

Hold the Line – Make a Morale check, if successful, it forces a Disordered Charge. If the enemy then fails their Charge, any other Charges which hit the Reacting unit will still count as Disordered.